In September 2021, TalentUp published the report “Barcelona Madrid: Digital Talent Analysis” in collaboration with GetWith. Data analyzed in this report comes from 371.68K job offers and 1.44M professionals collected within September 4th 2020 and September 4th 2021 in Barcelona and Madrid. It studies 11 different IT positions.

The report takes into account supply and demand, average salaries and benefits, differences by sector or position and diversity variables. This article will focus mainly on the sectors affected, on the offer and demand differences for each job position and how this affects salaries, and, in addition, it will reflect about the prevailing gender gap in information technology jobs.

Table of Contents hide
1 Which sectors are implied in this labour market?
2 Are candidates fulfilling the requisites of the job openings?
3 Does the average salary differ from Madrid to Barcelona?
4 How is this industry doing in terms of parity in Spain?

Which sectors are implied in this labour market?

For the 11 roles analyzed, there is a clear predominance of the information technology sector. Approximately there are 1.15 candidates for each job opening in both cities.

It is relevant to point out that the second most common area is the one related to business services. Nonetheless, it lacks workers. In Madrid, just 68% of the offers are covered by the supply. In Barcelona, the figure goes down to 33%.

This shows that the business services industry is demanding many professionals. It is possible that IT workers do not consider this sector when applying to offers which causes a simple mismatch between offer and demand. 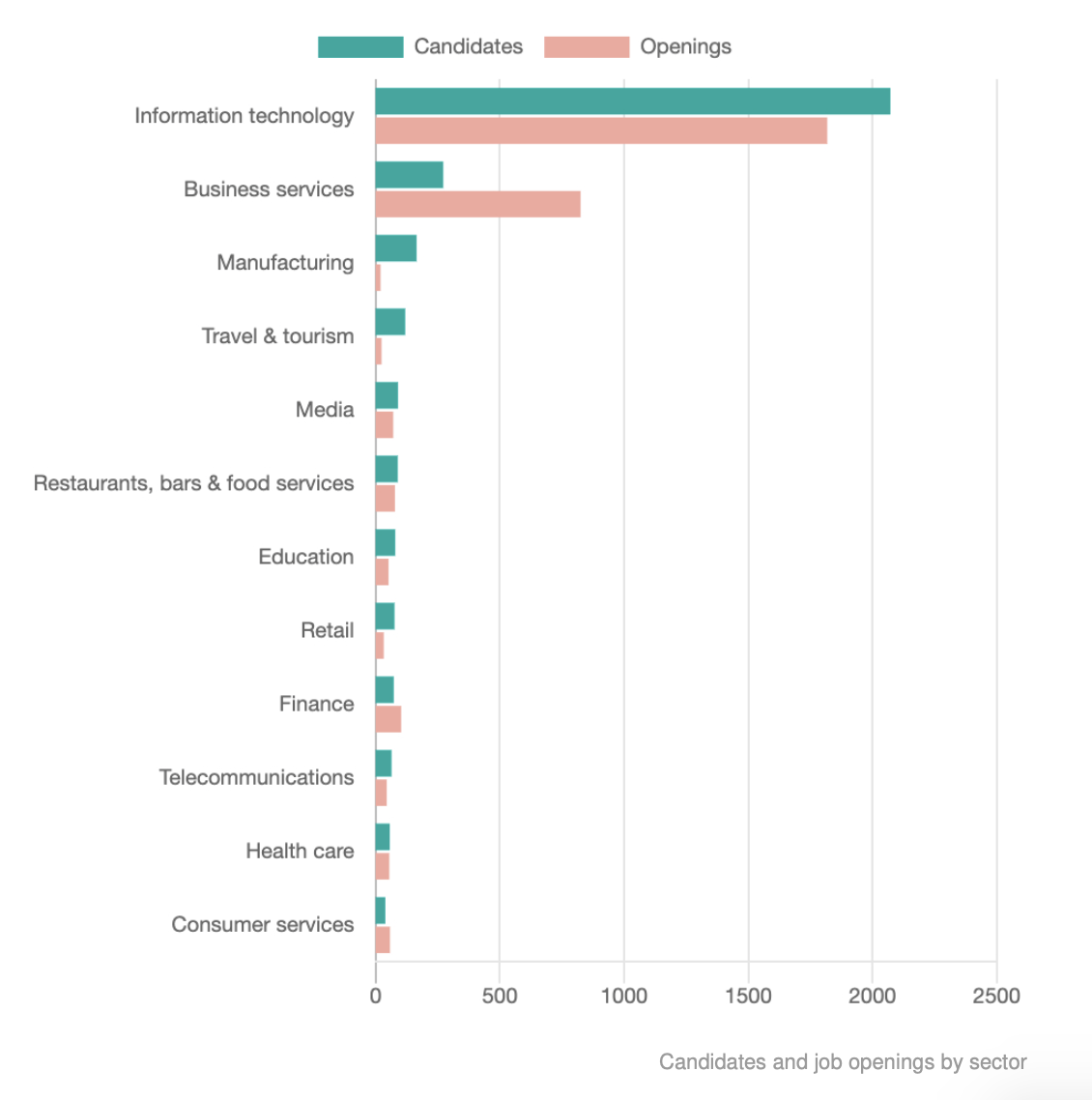 Are candidates fulfilling the requisites of the job openings?

Companies want to have many candidates available to have the possibility to choose. From workers’ point of view, it goes all the other way around. They want many offers and just a few competitors.

The most common candidates in both cities are frontend developers. Having said that, in Madrid, there are more than 2750 professionals for just a thousand job openings approximately. While in Barcelona there are 1300 matched to 1200 offers.

Madrid’s tendency is that offers have a surplus of candidates: in some cases there are more than 3 candidates per position. The exception are DevOps engineers which is the most demanded job there.

Meanwhile, in Barcelona, there is a lack of workers mainly in DevOps engineers too. They are demanded in nearly 15% of the offers and the supply hardly covers half of them. Also of Php (521 offers for 300 candidates), backend and full-stack developers are well coveted.

Some positions as Android and Java developers or data engineers have extremely few open positions and they are quite repeated among candidates. For example, in Madrid, Java and Android developers are the second and third most supplied jobs, respectively. And their openings account just for 10% of the total.

The key learnings are that both cities lack many DevOps engineers. Even so, other positions have too many workers for the current demand, especially frontend developers in Madrid.

Does the average salary differ from Madrid to Barcelona?

In Spain’s two biggest cities, all IT roles have similar average salaries for senior professionals.

In gross salary, Barcelona and Madrid do not differ significantly except for full-stack developers who, on average, earn 7800 EUR extra in Madrid (50th percentile). For other positions, it is not possible to establish any trend to indicate where the salaries are higher.

Regarding average net salaries, there are more differences within both cities. In the cases where Barcelona has a higher average,  the difference is not relevant (usually just one or two thousand more). However, both Android and full-stack developers earn close to 15000 EUR more in Madrid.

The case of full-stack developers may be caused because in Barcelona the ratio of the number of candidates to the number of job openings is smaller than 1 (0.85) whereas in Madrid is 1.05. Usually, for recruiting companies, this ratio is considered positive when it is above 1.

There is a surplus of Android developers everywhere, although it is more distinguished in Madrid where there were 1101 candidates for just 112 offers. The laws of supply and demand explain why the salaries of this position are higher on average.

To conclude with this section, we can draw the insight that even if the majority of positions have a standardized similar salary, the market still has power regulating slightly the prices and some differences can be observed.

How is this industry doing in terms of parity in Spain?

The gender gap has been a hot topic for the past years. Spain currently has some regulations to incentivize equality – Equality Plan Decree (Royal Decree 901/2020) and Equal Pay Decree (Royal Decree 902/2020). And it ranks the 14th position in the World Economic Forum’s Global Gender Gap Report 2021. Yet the information and technology sector still has a huge difference by gender.

In fact, Spain has descended on the ranking from the 8th position that it was in 2020. It seems that the pandemic has brought the gender gap more apart. That same report also states that the 33% female presence is the global average in Data and AI, with 20% in engineering and around 14% in cloud computing. Even if Spain has a long way to improve, its results are above the trend.

Barcelona and Madrid IT’s labour forces coincide in having just 33% of female professionals. Both cities have many similarities regarding this variable. In both of them, the position of quality assurance engineer (QA) stands out as the one with the most parity composition.

In Barcelona, these candidates represent roughly 10% and, in Madrid, it does not even reach 5%. This means that it represents just a small share of the talent and male profiles continue prevailing.

Moreover, QA professionals have one of the lowest average salaries in this sector, which can easily lead to a huge wage gap.

Employers should wonder what creates this difference. Can they help improve this situation? Is there something in their companies causing this? Whatever it is, shortly this data should change to benefit from heterogeneity in working teams and to ensure everyone is given equal opportunities.

The insights of this study showcase that employers in need of some special profiles should look in other markets rather than focusing just on their own city. And, on the other hand, workers of other profiles should broaden the market where they are looking for offers. Perhaps there is no deficient supply, perhaps it is just a problem of not searching in the correct market.